Halloween ranks, for me, up with New Year's Eve and Valentine's Day - as holidays that never live up to the hype.

This year, instead barhopping or going to a whole bunch of parties full of strangers, and then spending all the dollars on cab rides - I made the party come to me.

I threw a party, billing it as the lamest, mellow-est party in the city - and told people that only half-hearted costume attempts were acceptable.  Taking the pressure off the holiday made it so much better.  Despite some minor hostess meltdowns, the party was a major success - thanks some tarot cards and delicious food.

As I grow older, I have developed quite a sense of pride in my ability to feed people successfully.  I will never live up to my Mother's reputation, but like Peyton trying to impress Archie - I am going to keep trying.

Luckily, I live with someone who is also up to the challenge, and doesn't work on Saturday mornings.  So we were able to serve quite the menu.

His contributions -
Zombie Eyes - green olives, stuffed with pimento and grated cheddar cheese, wrapped in puff pastry (not phyllo dough, as he so sadly learned the hard way).

Meatloaf rats - meatloaf in roundish shapes with cheddar cheese in the middle (notice a trend?) - with eyes made of peas, ears made of carrot slices and a tail made out of uncooked pasta.  It was adorable, and delicious.

I received a pizza stone for my birthday (thanks Hazel!) and really wanted to take it for a spin.  My Mom has been making pizza for my entire existence and she has always made it look so.easy.  Its not quite as simple as I thought it was, but this was definitely a good learning experience.

My crust was nice and soft, but needs to be spread out a little more (after spending my whole life making and eating rectangular homemade pizzas, I now am living a circular life and it is going to be a hard adjustment).  Also, it took a pizza and a half to learn that you actually need to make dents in the dough so that you don't have pizza sauce dripping every where.

I am not sharing my sauce recipe, because its too embarrassingly easy. But the recipes other wise were-

Red sauce with green peppers and onions.  - Well, the onions need less time because they got burnt on the ends.  Whoops. Also, I think a few minutes being sauteed in a pan before being put on the pizza (rather than being put on raw) probably wouldn't hurt anything.  Easy-mozzarella-cheesey.

No sauce (I just brushed the crust with olive oil) with mozzarella, feta, marinate artichoke hearts and sun-dried tomatoes. Well, sun dried tomatoes can only cook for about a minute before they burn (these were dried, out of a bag, rather than marinated), so that was frustrating to discover, but otherwise this was quite good.  It was not actually as salty as I was anticipating.  It could have used more cheese (can't everything?) - especially on top, as without the sauce holding down the fort, the toppings were pretty out of control.  This was the least well received, but it also came out last, and I think by that point, people were out of room in the pizza compartment of their stomachs.

On top of this - our friends brought some amazing dips, a game-changing cobbler situation, some caramel apples, and wonderful company.  While there is a part of me that will always want to do an elaborate costume and have a wild and crazy Halloween adventure - I am finding as I grow older, that the quiet, delicious celebration is just as good. 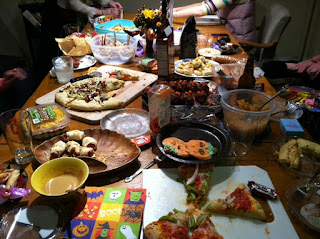 It's messy and crazy, but I would not have it any other way.
Posted by Rachel at 7:24 PM